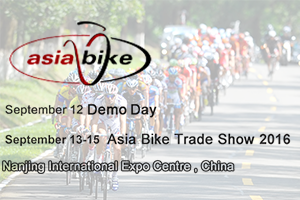 As the cooperative partner of Asia Bike and organizer of EUROBIKE, Messe Friedrichshafen provides strategies with professional knowledge and experience accumulated from the past over twenty years. Besides, EUROBIKE shares market resources, helping Asia Bike build direct contacts with world famous brands and carry out market promotion in Europe.

Since the first edition, the organizers of Asia Bike have brought in a series of professional and entertaining activities, such as Show in Show, Fashion Show, Test Center, Industry Forum, etc., and keeps on introducing new ones like Demo Day and Bike Travel Village, which help enrich the show and have been well received by the exhibitors, visitors and medias.

The birth of Asia Bike fills in the gap of sports and luxury bikes exhibitions and has received continuous attention from over one hundred medias home and abroad, including influential online medias, such as BIKETO, Bike-europe, as well as well-known cycle magazines, such as Cycling, Bicycling, Bike Market, Cycle Press, etc. Besides, mainstream daily newspapers, life and fashion magazines, dozens of TV and radio stations report from the show. All-round cooperation with medias helps Asia Bike to establish a good image and promote the development of domestic cycling.

The 1st Asia Bike was successfully held in Nanjing in 2011. The total exhibition size was 12,000 square meters, displaying 138 famous brands of bikes and components from all around the world, of which 95 brands were overseas, such as Britain, USA, France, Netherland, Italy and Japan. The show attracted 11,957 trade visitors from bike retailers, department stores, company purchasing departments. Besides, 238 reporters from 96 medias came to the spot.

The 2nd Asia Bike was held in Nanjing from July 26 to 29, 2012. The exhibition size extended to 24, 000 square meters with 238 brands from 14 countries and regions. The four-day exhibition received 10,481 trade visitors and 3751 riders and cycling lovers in the last two public days. 337 reporters from 147 medias came to report the show.

Different from the previous two editions which were held at the same time with Asia Outdoor at the end of July, the 3rd Asia Bike changed its timing to October 10-13, 2013. The total exhibition size was 36,000 square meters (26,000 square meters indoors, 10,000 square meters outdoors). Among the 394 brands, 80.5% were overseas. The four-day exhibition received 7,020 trade visitors and 4,654 cyclists in the last two days. 261 reporters came to the show.

The fifth edition of Asia Bike Trade Show in Nanjing China successfully closed on Oct. 12. A total of 433 brands came over from all over the world to Asia Bike with their latest innovations and products on the fairground of about 40,000 sqm. Among all exhibitors, the international brands took up a proportion of 72%. In the four-day exhibition, 8866 trade visitors plus 4358 public visitors (13,224 in total) found their way to Nanjing.

The 6th Asia Bike will meet the industry with more passion and considerate service in Nanjing, China, from Sept. 13 to 15, 2016. The 4th edition of Demo Day will be held on Sept. 12. Stay tuned for a better Asia Bike.