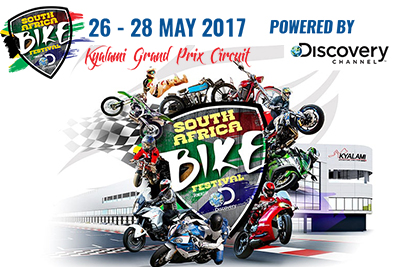 2016 saw international media and exhibition company, Clarion Events UK, launch the inaugural and premier South Africa Bike Festival, powered by Discovery Channel, at Kyalami Grand Prix Circuit in Gauteng, adding yet another successful product to their already impressive global motoring portfolio. After two long years of extensive refurbishment, Kyalami reopened its doors to the world of motorcycling for three days of thundering two-wheeled, rip-roaring live action for a fun-fuelled day out for the whole family.

As a launch event, the core industry was delighted and is calling it a “booming success.” Festival organisers announced an impressive 24, 522 visitors, with 88 industry-related exhibitors, 16 motorcycle manufacturers, 13 of SA’s favourite bands/musicians and 21 hospitality brands and food trucks.

Together with headline media partner, Discovery Channel, and festival sponsors Tiger Wheel & Tyre, ABI, SAB, CARTRACK, Sun International, The Star Motoring, Michelin, Dunlop, Tissot and Monster Energy, South Africa Bike Festival welcomed visitors with the combined intention to ensure the festival becomes THE MUST ATTEND annual motorcycle showcase in Southern Africa for decades to come. This objective has been met with over 50% of the existing manufacturers and exhibitors already securing their participation for 2017 with dates announced as the same weekend next year, Friday, 26 to Sunday, 28 May.

According to Toby Venter CEO, Kyalami Grand Prix Circuit & International Convention Centre, “Our three year agreement from 2017 with Clarion Events, to stage South Africa Bike Festival at Kyalami Grand Prix Circuit, continues to build on the success we saw with the inaugural event held in 2016. We look forward to growing a long term partnership with the Clarion Motoring team to progress live event opportunities for the industry and public in South Africa.”

Extensive research was conducted to profile the festival visitors using online surveys and at-event questionnaires. An independent research team from Tourism Research in Economic Environs & Society (TREES) concluded that the majority of respondents were in their late thirties, 67% of which were male, 22% were from outside Gauteng and over 68% attended with children under the age of twelve. It was particularly noted that visitor numbers were above average in the growing segments of the market including women, families, the emerging market and young professionals.

Nicole Muller, Festival Director states: “Our long term aim is to create a sustainable, annual and internationally recognized brand that will bring together the veteran riders to casual fans alike in order to encourage and grow the next generation of motorcyclists in Southern Africa. We are delighted that Kyalami Grand Prix Circuit shares our vision and will be the venue partner for the next 3 years on this exciting journey. By building on the partnerships created in 2016, as well as introducing more lifestyle elements, we intend to become South Africa’s annual and premier motorcycle, music and lifestyle festival.”

And with this in mind, Nicole and the core team, gear up for an even bigger and better festival for next year, and are calling all corporate brands and industry related businesses to get in touch to receive a custom sponsorship package to meet their 2017-2018 business objectives.

There are many interactive motorcycle and lifestyle related activities planned, which offer brands the opportunity to connect with this new and attentive South Africa Bike Festival audience as it corners into its second year. Unlike all other forms of advertising, live events are the only medium where visitors have deliberately chosen and paid to see the brands. This is the time when engagement ignites and there are only THREE days next year to meet thousands of consumers looking to try, test, ride and buy!

Don’t miss your opportunity to be part of the next generation of motorcycling in Southern Africa!