As China’s largest cycling festival and cycle expo based in Beijing jointly created by China Bicycle Association and HAOSI International, Beijing International Cycle Expo 2015 and the 4th Beijing Cycling Festival will be held in Beijing BaDaLing International Exhibition Center in June 26-28, 2015 after the huge success in 2014. Beginning from 2014, the Expo and Festival will be held in Beijing every year. It is characterized by “culture, professionalism, innovations” this year, focusing on professional high-end brands, innovative technologies and development trend of this industry, promoting commence and trade communication and cooperation, trying its best to build a service platform for northern dealers, aiming at promoting the sound development of bicycle industry and advocating healthy and eco-friendly bicycle culture. At the same time, it centers on the development of the northern market and characteristic and efficient brand expo which merges exhibition, commerce and trade, competitions and carnivals into a single whole relying on unique advantages in resources and cycling heritage in Beijing. Major leaders of China Bicycle Association, Beijing Olympic City Development Association, Yanqing County People’s Government, near a dozen representatives of dealers and clubs and journalists of numerous media attended the press conference. 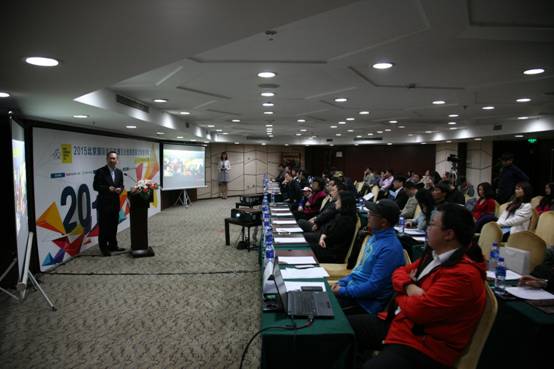 According to the Organizing Committee, Beijing International Cycle Expo 2014 and Cycling Festival covered an area of 10,000 m2 and attracted nearly a hundred exhibitors, and northern dealers from key cities and over 10,000 visitors. Beijing Expo 2015 will be largely improved on the basis of the previous expo, promoting its brand awareness and influence, becoming China’s largest cycling festival and cycle expo. It will cover an area of 20,000 m2, twice that of last year. The Organizing Committee will work with near one hundred clubs in the 18 key cities in the north, organizing “Ride and Gather - All Roads Lead to Beijing” which will cover 12 provinces, 50 middle and large cities, putting emphasis on advocating bicycle culture, largely promoting “green travel” and eco-friendly concept.

The vice president and secretary of China Bicycle Association Guo Wenyu attended the press conference and said that China Bicycle Association had been devoted to promoting bicycle culture and realizing the overall promotion and upgrading of this industry by the integration and interaction of this industry and culture of which Beijing International Cycle Expo and the Beijing Cycling Festival was the outcome. He hoped that this Cycle Expo and Cycling Festival would actualize the sound interaction between bicycle industry and culture, becoming the assistor of the overall development of the bicycle industry. 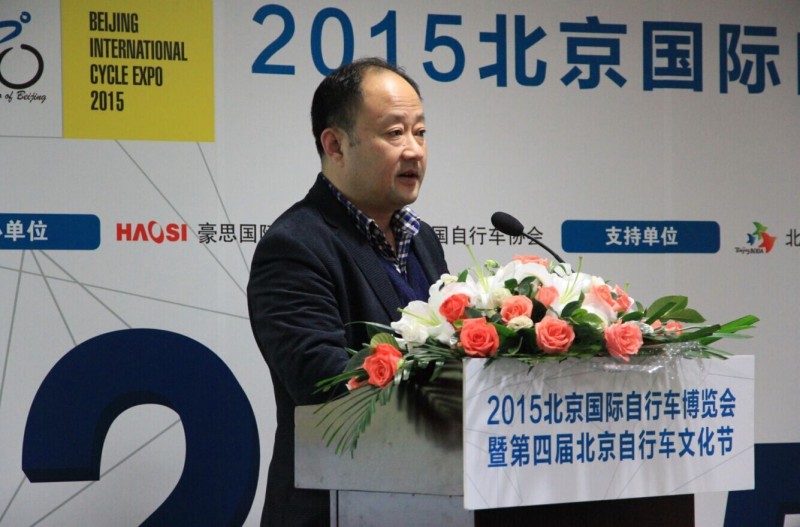 As supporter of Beijing International Cycle Expo and Cycling Festival, the vice director of Yanqing County People’s Government Zhang Suzhi said that Beijing International Cycle Expo 2014 and the 3rd Beijing Cycling Festival had a great influence in the bicycle industry. She hoped the Expo and Cycling Festival this year would center on the development of the northern market and characteristic and efficient brand expo which would merge exhibition, commerce and trade, competitions and carnivals into a single whole relying on unique advantages in resources and cycling heritage in Beijing. Yanqing County People’s Government planned to fortify the foundation of cycling tour, upgrade competes to a higher level, promote the brand influence of “Cycling Tour” and cycling culture and create a more comfortable cycling environment for armatures. Held in Yanqing, Beijing International Cycle Expo and Cycling Festival created a sound cycling environment and contributed to the increase of cyclists in Yanqing, promoting the development and boom of cycling by bicycle culture and industry. 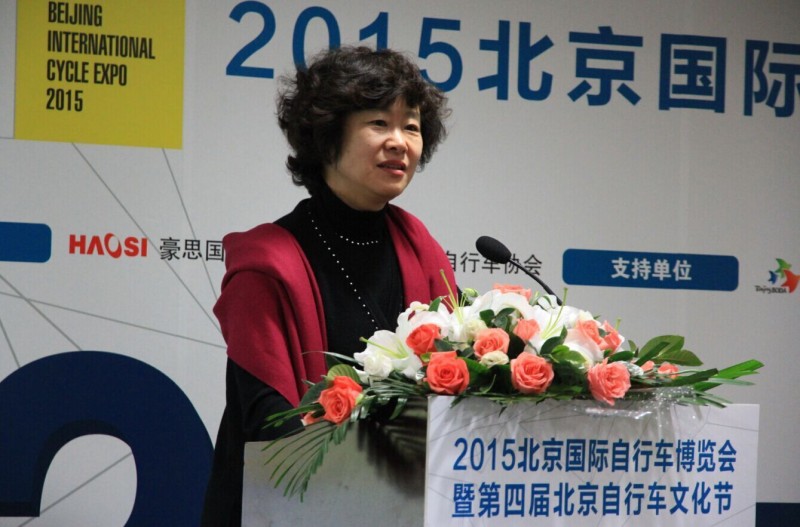 Ye Xun, President of HAOSI International, the host company of the expo and festival introduced Beijing International Cycle Expo 2015 and the 4th Beijing Cycling Festival in details and launched the publishing ceremony of the prominent defining culture activities. While retaining the features of Expo 2014, Expo 2015 and Cycling Festival will create China’s largest cycling festival and cycle expo based in Beijing characterized by a higher level of “culture, professionalism, innovations”. 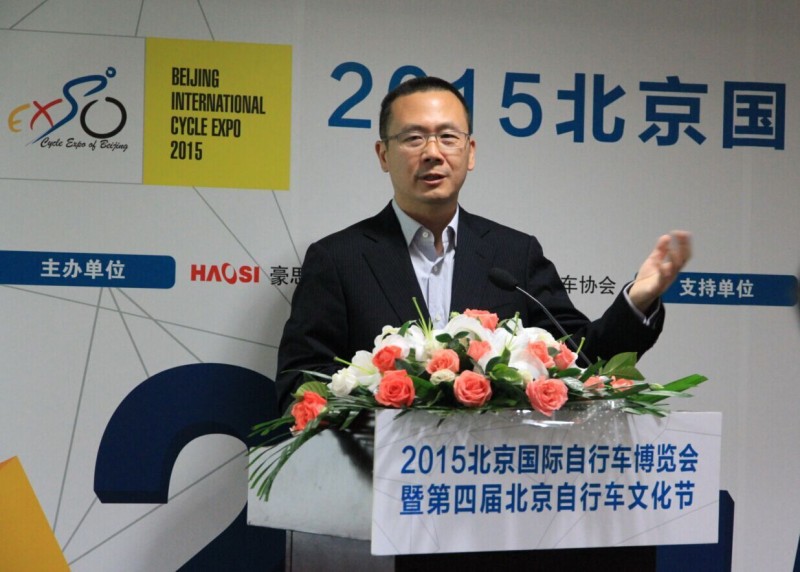 Beijing International Cycle Expo 2015 and Cycling Festival will primarily focus on “culture”. Firstly, it will promote tournament experiencing activities which will enable the visitors to participate in and experience the sprint and award ceremonies, enjoying cycling and the culture. The Organizing Committee will largely promote cycling experiencing activities and launch the large-scale activity “Ride and Gather - All Roads Lead to Beijing” for the first time, making the scope of this cycling festival cover 50 northern cities, 6 professional cycling routes, 12 provinces and municipalities. Over 1000 cyclists will take part in “Ride and Gather - All Roads Lead to Beijing” and experience this half-month long ride, disseminating bicycle sportsmanship and bicycle culture and advocating “green travel”, low-carbon and eco-friendly concept and healthy lifestyle. Beijing Youth Daily Group largely supports “Ride and Gather - All Roads Lead to Beijing”. Tudou Sports is its video partner. Bicycling, Cycling, China Bicycle, the World Sports Expo, BikeCEO.com, onLINE BIKE, Qixing, BIKEFANS, onEBIKE will report the news as it develops. Locate at the cities wher the 6 routes start, Harbin Ghost Bicycle Club, Qingdao Bicycle Club, Xi’an Collap Bicycle Club, Inner Mongolia Bicycle unio and Huihang Bicycle Club had their representatives attend the press conference, publishing and flags presenting ceremony of the large-scale activity“Ride and Gather - All Roads Lead to Beijing”. Gou Zi the long ride specialist of Qingdao Bicycle Club said “Ride and Gather - All Roads Lead to Beijing” which was initiated by Beijing Expo and Cycling Festival Organizing Committee, was suitable for bicycle clubs nationwide in terms of the overall form and content and was attractive to cyclists. As the representative of bicycle clubs and a senior cyclist, he would love to promote cycling culture and take action to call upon the masses to take part in “green travel” and advocate the green, low-carbon and eco-friendly concept. Besides that, on the basis of the previous one, this Expo and Cycling Festival will fortify bicycle fashion art by virtue of the succession of the super popular cycling fashion show and bicycle stunt performance and introducing art elements which will match the fashion of bicycle sports, and will invite the promising sculptor Pang Shaoxian, making the expo an unique interaction of bicycles and art, enabling the visitors to have novel experience. What’s more, Beijing International Cycle Expo and Cycling Festival will promote the “green travel” concept as usual. The Organizing Committee will continue to launch popular routes, offer bicycle renting service in the exhibition, and will launch exclusive cycling tour service for clubs for the first time. The Organizing Committee extends its warm welcome to all cyclists and bicycle armatures to experience the pleasure of cycling and calls on more bicycle clubs to organize cycling activities, enjoy the expo, cycling festival, specialty food and drinks, cycling and the beautiful scenery, experience low-carbon, eco-friendly and healthy tour. 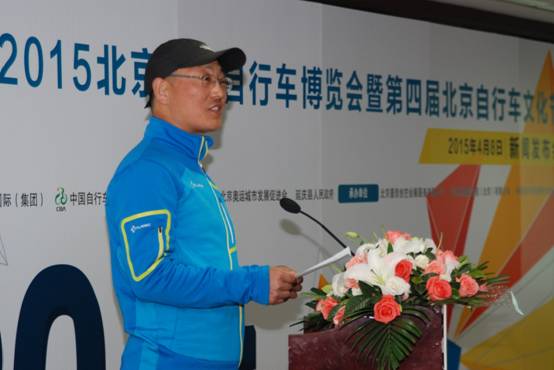 This Expo and Cycling Festival will keep up its professionalism, focusing on domestic and overseas bicycle brands, exhibiting bicycles, components, accessories, equipment and other professional products of this industry. It’s learnt that, by the end of March, the bicycle enterprises that had decided to take part in the exhibition include Merida, UCC, GHOST, LOOK, Rikulau, MARMOT, LANGTU, Flying Pigeon, Motion, Kinesis, CUBE, MJRC, BH, FOCUS, JAVA, Lighting, Hanglun, Chuangkuku, Kouan, CANNONDALE, while the components and outdoor enterprises include SANTIC, MAXXIS, Innova、Jakroo, SHAKELAND and so on, exceeding 60 enterprises and 100 brands. Over 1000 trade visitors had pre-registered. The Organizing Committee successfully built workstations in 18 northern key cities, the bridge between the Organizing Committee and trade visitors, laying a solid foundation for “northern dealers service platform”. As a professional exhibition platform in this filed, Beijing Cycle Expo will promote products, technology study and trade communication. It’s an effective way for bicycle manufactures to show their excellent products, strengthen the present selling system and complete brand marketing network. The Cycle Expo and Cycling Festival Organizing Committee will officially establish “Green Facility unio” this year. It is another cultural project and service platform jointly created and advocated by China Bicycle Association and Haosi International after Beijing International Cycle Expo and the Beijing Cycling Festival, aiming at coordinating with the Cycle Expo and Cycling Festival, offering more purposeful and comprehensive service to the enterprises. China Bicycle Association and Haosi International are devoted to promoting the development of the bicycle industry, advocating and popularizing bicycle culture and the concepts of “green travel” and “low-carbon”. By inheriting the same mission, the Green Facility unio is expected to offer better service and a bigger platform to the enterprises and dealers, offer more activities and help to cyclists and amateurs, make a contribution to popularizing and promoting bicycle industry and culture nationwide and developing the “bicycle ecosystem”. The Deputy Secretary of China Bicycle Association Jia Gang said this Expo and Cycling Festival had set up a series of activities in terms of tournament experiencing, cycling experiencing, fashion and art, healthy tour which would promote and deepen bicycle culture. He hoped the cyclists and armatures would enjoy it, experiencing bicycle culture. At the same time, he also hoped that by promoting “Green Facility” unio which was launched by the Organizing Committee, they could bring the power of this industry together, improving the service quality and awareness of the store owners and dealers, promoting green and low-carbon industry and the sense of honor and mission, offering better service and more culture activities to cyclists, jointly promoting the overall development of bicycle industry. 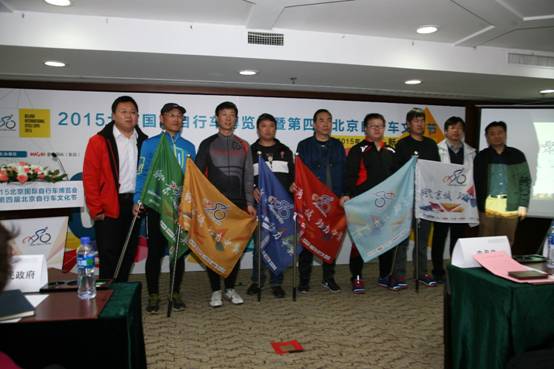 As an international expo and large-scale culture activity of this industry, it is necessary for Beijing International Cycle Expo and Cycling Festival to pay attention to “innovations” namely cutting-edge innovative technologies and development trend. In terms of setting up booths, the Expo and Cycling Festival this year will promote eco-friendly assembly package. With regard to the hot topics of this industry, “intelligentization of bicycles” and “bicycles and tourism”, the Organizing Committee will host forum sessions, organizing transboundary discussion among the bicycle industry and other industries, promoting integrative development. The Expo and Cycling Festival will encourage and support visitors to try cycling, experiencing the vigor and pleasure of it.
For more information：www.beijingcycle-expo.com