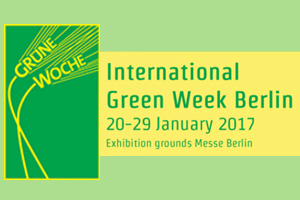 Green Week underlines its role as the world’s major platform for agricultural policy dialogue – Public keen to make purchases and experience Messe Berlin’s best attended event - GFFA with leading representatives of agriculture and agricultural policy-making from more than 100 countries – Attendance of just under 400,000

In its 90th year the International Green Week Berlin 2016 again alerted its standing as the world’s most important exhibition for agriculture, food and horticulture. This event, taking place for the 81st time since its inception in 1926, attracted unanimous praise from agricultural policy-makers and the business sector, as well as from trade visitors and the general public. From 15 to 24 January a total of 1,660 exhibitors from 65 countries provided a comprehensive review of the food industry’s global market and of the achievements of agriculture and horticulture. During the ten day agricultural show just under 400,000 people attended the trade fair and conferences, including more than 10,000 trade visitors. There was an excellent response to the many attractive shows aimed at the public, as well as new displays, covering an area of 118,000 square metres in the halls. These included the return of the federal state of Rheinland-Pfalz, the WEINWERK, a new platform for presentations by German wine producers, and the show organized by the Federal Ministry for Economic Development and Cooperation on the subject of “A World Without Hunger Is Possible”. Morocco, the first non-European partner country at the Green Week, staged a very competent display featuring all of the country’s main food products as well as luxury items.

Dr. Christian Göke, Chief Executive Officer of Messe Berlin GmbH: “The Green Week is indispensible for the entire agricultural sector. Once again the world’s main event for the industry effectively demonstrated its function as a leading trade fair and a platform for a dialogue between national and international agricultural policymakers. The ten days of discussions involving trading partners from the entire value added chain were a prominent feature of this event. From producers to food retailers, representatives of every aspect of agribusiness attended in order to obtain an overview of the market, establish contacts and conduct business. The range of foods and luxury items from all over the world, the regional specialities from Germany, and the displays by agriculture and horticulture provided visitors with many memorable moments and met with their widespread approval.”

Increase in per capita expenditure

In addition to the large volume of visitors a daily average of 10,000 other people were also in the exhibition halls, including exhibitors and stand personnel, service staff and media representatives. At 121 euros (2015: 117 €) per capita expenditure was slightly above last year’s level and provided exhibitors with sales totalling some 47 million euros . Visitors spent an average of 29 euros each on food and beverages consumed at the fair. In addition the value of the goods ordered amounted to 92 euros per visitor.

Leading representatives of all the parties in the lower house of the German parliament, the Bundestag, paid fact-finding visits to the Green Week. They included Dr. Dietmar Bartsch, Chair of the DIE linkE group in the Bundestag, Katrin Göring-Eckardt, Co-Chair of the BÜNDNIS 90/DIE GRÜNEN group in the Bundestag, Dr. Anton Hofreiter, MdB, Co-Chair of the BÜNDNIS 90/DIE GRÜNEN group, and Volker Kauder, MdB, Chair of the CDU/CSU group in the Bundestag. The opening ceremonies in the CityCube Berlin were attended by some 3,500 invited guests, including more than 800 delegates from over 90 countries. The spotlight was on the partner country, Morocco, represented by Her Royal Highness Princess Lalla Meryem and Aziz Akhannouch, Minister for Agriculture and Ocean Fisheries. Joachim Rukwied, President of the German Farmers’ unio, and Dr. Wolfgang Ingold, Chairman of the Federation of German Food and Drink Industries, represented the non-commercial sponsors of the Green Week.

At the 8th Global Forum for Food and Agriculture (GFFA), held from 14 to 16 January, parallel with the Green Week Berlin 2016, the three days of discussions by some 2,000 representatives from politics, and business, science and civil society from over 100 countries dealt with ways in which urban food supplies can be safeguarded in the future, and the part that agriculture and rural areas can play in this process.

Germany’s capital benefits from the impact of the Green Week

News about the Green Week was circulated around the world by some 4,500 accredited journalists from 65 countries, including representatives of the International Association of Agricultural Journalists from every continent. International coverage, combined with many reports about business and cultural activities, as well as entertainment and leisure opportunities in the capital, provided Berlin with additional publicity with long term benefits for the city. The expenditure by out-of-town visitors and exhibitors at the Green Week provided Berlin and the surrounding region with an influx of purchasing power worth more than 150 million euros.

Statements made during the course of the fair

The Federal Ministry of Food and Agriculture and the non-commercial sponsors of the Green Week summed up events at the fair in the following statements:

Christian Schmidt, Federal Minister for Food and Agriculture: “The International Green Week highlights the pride in the achievements of agriculture and the food industry. It is also a forum that demonstrates our sense of responsibility and our contribution to sustainability, and a trade show that characterizes the lifestyle and attitude to life of our green professions. It has been shown here that today’s farmers are IT specialists, protectors of the countryside, nature and animal conservationists, food experts and entrepreneurs all in one. Their achievements are outstanding. I have no doubt that the 81st International Green Week has played its part in promoting a greater appreciation of our food. Our farmers have shown here just why they are the best ambassadors for agriculture at the heart of society.”

Joachim Rukwied, President of the German Farmers’ unio (DBV): “The Green Week 2016 has been a success for agriculture in this country. At the beginning of the year we, the Farmers’ unio, have been able to conduct a very large number of discussions about agricultural and business policy and, in general, these have been constructive and aimed at achieving viable solutions. Given the very difficult economic situation facing our businesses as a result of the Russia embargo and the economic weaknesses of a number of emerging countries such as China, we have also been discussing measures for overcoming the pressures on liquidity in many farming businesses. The Farm Experience, which was very well attended, has been characterized by an open and genuine dialogue between agriculture and society. Compared with last year, greater use was made of the special attractions for schoolchildren."

Christoph Minhoff, Chairman of the Federation of German Food and Drink Industries (BVE): “In its 90th year the IGW here in Berlin has again shown the sort of achievements of which the international food industry is capable. It reflects a unique diversity of flavours and cultures. It is only right, and very important, that Germany should host this event, because of the outstanding ability of the country’s food industry to supply safe, high quality food at reasonable prices. On our stand our federation has been able to inform consumers directly about these achievements. Our display kitchen, cooking with school parties, appearances on the dialogue stage and the numerous quiz events have enabled further progress to be made in the work of explaining, training and discussing, as well as creating transparency.

An initial analysis of the survey carried out by an independent market research organization revealed that all the target groups at the Green Week displayed a thoroughly positive response to the event.

Three quarters of the exhibitors expressed a positive opinion about their participation in the fair and, at the time they were being questioned, were already planning to take part in the next Green Week, or to recommend the fair to other companies. The objectives of the exhibitors at the Green Week were “to present their own company/cultivate the company’s image”, “inform consumers”, “sell to end users”, “attract publicity in the media” and to “introduce and test new products”. The overwhelming majority of exhibitors were able to achieve these objectives to a very great extent. Two thirds of exhibitors assessed the commercial results of their participation in the fair as positive and an equal number expect the contacts made at the Green Week to result in follow-up business.

The trade visitors came primarily from the sectors of agriculture and forestry, the food industry, commerce, horticulture, and the hotel and restaurant trade. Their primary interest was in obtaining details about the products on display, information about various sectors of industry and maintaining contacts.

The general public attended primarily to experience a unique event, to acquaint themselves with specialities from all over the world and with regional products from Germany, and to learn about the industry’s latest innovations. With its informative and entertaining programme the Green Week largely met these expectations. Once again the special shows were a big hit with the public. Among the sections that the general public rated highest were the Floral Hall, the Livestock Hall, the Farm Experience and the Organic Hall.

The International Green Week Berlin 2016 was organized by Messe Berlin GmbH. Its non-commercial sponsors were the German Farmers’ unio (DBV) and the Federation of German Food and Drink Industries (BVE). The 82nd Green Week will take place from 20 to 29 January 2017 on the Berlin Exhibition Grounds.

This press release, 250 reports on day-to-day activities during the Green Week 2016, some 800 topical press photographs and a further 290 historic photographs can also be found on the internet: www.gruenewoche.com / Press Service.