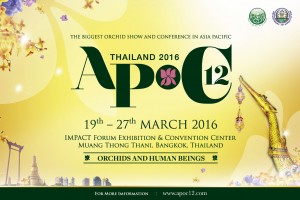 Detail
about
The Asia Pacific Orchid conference was initiated in 1984. One of the founding members is professor Repee Sagarik. It aims to achieve an international cooperation for trends in development and conservation of orchids in Asia Pacific region. The 1st conference started in 1984 in Japan and has been held in different countries rotated among member countries in APOC community every three years. In 1992, Thailand hosted the 4th conference which was organized in Chiang Mai, where Maejo University took the main responsibility hosting the event.
In 2010, Professor Rapee Sagarik, an ornamental plant advisor of the department of agriculture, foresaw particularly benefit for being the host of the conference. The department of Agriculture then submitted a project to the Thailand Ministry of agriculture and cooperations and Asia Pacific Orchid Committee. The committee has recognized the potential of Orchid Thailand and therefore agreed that Thailand will host the 12th Asia Pacific Orchid Conference (APOC) on the upcoming March 19th-27th, 2015
Objectives
The objectives of the Trust shall apply especially to countries in the Asia Pacific Region, and are to promote awareness and development of the hybridization, cultivation, science and conservation of orchids and to support research in these fields.
Activity
In pursuit of its objectives, the Trust shall invite and approve applications to host the Asia Pacific Orchid Conference (APOC) from suitable organizations, which Conference shall occur every three years or at intervals determined by the Trustees.
Contact
Name:Secretariat Office
Address:apoc2016@yahoo.com
Telephone:+662–790–3888 ext.1545
Reward
0 Related Reviews