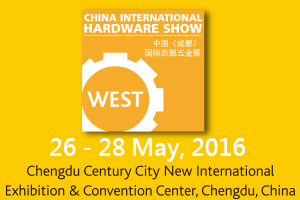 After 10 years of building its foundation, the western region of China has entered a stage of accelerated development. The 12th 5-year plan sets the target for the region to elevate the economy and the income of the population to be higher than national average as well as achieving urbanization of over 45%.

Immense business opportunities awaiting with the rapid development of the region for the last 10 years to achieve a total average annual growth of 23.2% for imports and exports and incremental foreign direct investment of 181.54%.  To promote the development of the hardware industry and the western region as well as to create opportunities for leading Chinese hardware manufacturers to set up production plants, CIHS WEST was created for the region as a sister event of China`s premier hardware trade fair, CIHS.